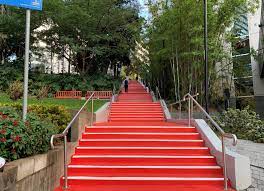 CONVEYANCING HOME QLD has your Pick of the Week, a Brisbane CBD green oasis that you can visit everyday; no need to wait till the weekend! Discover King Edward Park in Brisbane City, for historical places, a respite, and Jacob’s Ladder provides an important connection between the City and Spring Hill. During the Second World War II, an air raid shelter in sandstone was erected s a public shelter and is a rare example of public shelters built in Brisbane in WWII.

The old trees in the park contribute to the green in the city and the production of oxygen. At the base of Jacob’s ladder are four very particular sculptures, le Forme del Mito, created by Arnaldo Pomodoro in 1983. These sculptures were originally theatre set pieces for Agamemnon, a classical Greek tragedy. Buying or selling a property? Call us anytime for help. We are your Conveyancing specialists, and we really know Brisbane! #conveyancing #sellhome #homebuyer

The statues were brought to Brisbane during Expo 88 and then Brisbane City Council purchased them. Originally posted in King George Square, today they are the bottom of Jacob’s Ladder in the centre of the city. 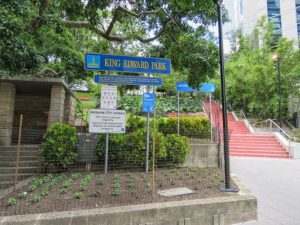 Monstera is a beautiful evergreen climbing tropical plant. It has large and perforated leaves, an ideal ornamental plant that grows well in the climate of Brisbane. There is a graded trail in the park for the people who want to avoid the stairs. The bush stone curlew is an Australian bird that has adapted to live in the cities. The curlew is mainly a nocturnal bird but it can be seen during the days in gardens.

Memories of Wind was one of four sculptures exhibited at World Expo ’88 by Japanese artist Fumio Nishimura.
Soft lines of a female figure emerge from the sculpture’s abstract granite forms. the figure remains unaffected by the passing of time in its environment, as Nishimura contrasts the ephemeral state of memory with the permanency of stone.

Robert Parr was born In Adelaide in 1923. Originally trained as an engineer, Parr moved into sculpture in the 1960s. Still, life scenes are consistent themes across his work. The white steel sculpture features a bouquet of flowers on a table and two framed landscapes, one real and one imaginary.

If you keep exploring the little park, you come across an interesting chessboard with benches under a tree. The sculpture Gates of Heaven can be found on the way to the top of the park.

On the top of the park on Wickham Terrace, you can see the old windmill, the oldest building in Brisbane. The windmill was built in 1828 as a means of punishment for the convicts at the time of Captain Patrick Logan.

After strolling in the park and taking the views around and of the Old Windmill, you can have a break. Just opposite the Old Windmill is The Mill Espresso Bar, offering quality coffee, sandwiches, slides, biscuits, pies, quiche and sausage rolls. You can have a breezy coffee or you can relax and enjoy a great cup of coffee with something delicious to eat.